Why the World Is Approaching Peak Population

The world’s population passed the 8 billion mark in November, up from 7 billion just eleven years ago. The announcement may have left many with the impression that humanity’s numbers are on track to grow indefinitely. This is not the case. Global population growth is slowing, and the world’s population will likely peak later in the century, then decline.

According to the UN Population Division, the world’s population passed the 8 billion mark in November, up from 7 billion just eleven years ago and 2.5 billion in 1950, when the UN first began keeping statistics. The announcement, which was widely covered in the media, may have left many with the impression that humanity’s numbers are on track to grow indefinitely.

This transition, whose pace and timing closely track economic development, normally begins with large declines in mortality rates, especially among infants and children. When it first got under way in what we now call the developed world during the industrial revolution of the nineteenth century, it set the global population on a steady upward trajectory for the first time in human history. When it finally got under way in the developing world beginning in the 1950s and 1960s, it triggered an even greater explosion in global population growth—and widespread fears that a teeming humanity would soon be falling off the edges of all seven continents.

These fears proved to be misplaced. As the demographic transition progresses, it enters a second phase in which fertility rates also fall. After a generation has passed, people realize that they no longer need to have six or seven children in order for three or four to survive to adulthood. As economic development takes off, and returns to human capital increase, people also begin to focus more on investing in the quality rather than quantity of children, and the norm for what constitutes ideal family size declines. Eventually, population growth slows—and, in countries where fertility rates fall far enough, slow growth turns into decline.

It is well known that the fertility rate in almost every developed country has sunk beneath the so-called 2.1 replacement rate that, absent immigration, is needed to maintain a stable population from one generation to the next. What is less appreciated is how swift and steep the fertility decline has been in most of the developing world. Since 1970, the fertility rate in East Asia has fallen from 5.4 to 1.2. In Latin America, it has fallen from 5.2 to 1.9, and in South Asia from 5.9 to 2.2. In 1970, just 11 percent of the world’s population lived in countries with below-replacement fertility, almost all of them in Europe. By 2000, the share had risen to 46 percent. As of 2021 it stood at 68 percent. (See figure 2.)

With most of the world’s population now living in countries with below-replacement fertility, one might wonder why the global population is still growing. There are two reasons, the first of which involves what population experts call “demographic momentum.” From Brazil to India, many of the countries that now have below-replacement fertility rates had very high fertility rates a generation ago, which means that very large cohorts of women are now in their childbearing years. As a result, even though these women are having children at low rates the population will continue to grow, at least for a while.

The second reason is that there are some places in the developing world where the demographic transition has progressed more slowly and fertility rates remain very high. By far the most important place is sub-Saharan Africa, which now accounts for one-seventh of the world’s population. The fertility rate there averaged 4.6 in 2021—a lot lower than the 6.7 it averaged in 1970, but still far above the replacement rate. There are also a scattering of countries in the Greater Middle East, including Afghanistan, Iraq, Pakistan, and Yemen, where fertility rates remain far above replacement.

When the world reaches peak population will depend largely on what happens in its remaining high-fertility countries. The UN assumes that their fertility rates will continue to decline slowly but steadily, with the average rate in sub-Saharan Africa dropping to 3.0 by 2050 and to 2.0 by 2100. Its projections show the global population peaking at 10.4 billion in 2086. Other respected projections by The Wittgenstein Centre for Demography and Global Human Capital and the University of Washington’s Institute for Health Metrics and Evaluation (IHME), which assume a more rapid fertility decline, show the global population peaking somewhat sooner and at a somewhat lower level.2

With the whole world moving through the demographic transition, one might expect that population growth rates would be converging across its different countries and regions. Yet just the opposite is happening. Because the timing and pace of the demographic transition vary so greatly from place to place, the spread in population growth rates is now widening.

This demographic implosion will be difficult to reverse. For one thing, some research suggests that countries where fertility remains far beneath the replacement rate for more than a generation may enter a “low fertility trap” in which the social norm for ideal family size becomes stuck at a permanently low level.4 China, which has abandoned its longstanding one-child policy and is now struggling without success to raise its fertility rate, would seem to be a case in point. For another thing, many low-fertility countries now face negative demographic momentum. Fertility rates have been low for so long, and the cohorts of women now in the childbearing years are so small, that even if these women were to have children at much higher rates the population would continue to decline for decades to come.

These diverging demographic trends will lead to enormous shifts in the distribution of the global population. Between 1950 and 2021, Asia accounted for three-fifths of total global population growth. By the 2050s, Asia will be accounting for none of it and Africa will be accounting for more than all of it. In 1950, the population of Europe was more than two times larger than Africa’s. By 2100, the UN projects that Africa’s population will be nearly seven times larger than Europe’s. Along the way, the global demographic landscape will be transformed beyond recognition. (See figure 3.) 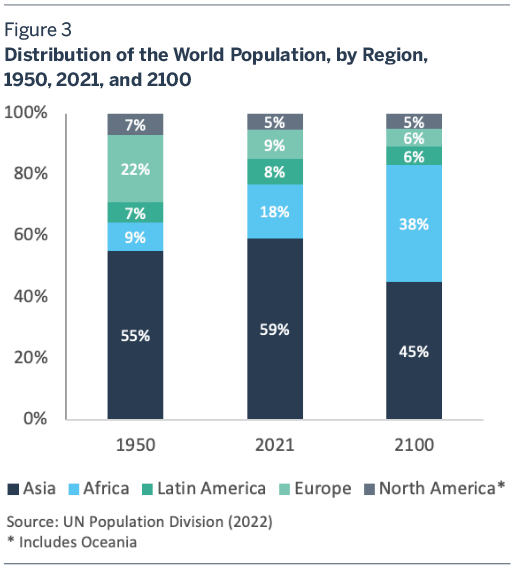 A Host of Challenges

While the nightmare prospect of a teeming humanity falling off the edges of all seven continents has receded in the twenty-first century, the emerging new demographic realities still pose a host of challenges.

Overcoming these challenges will be much easier if the world remains interconnected. Open global labor markets can match workers in younger and faster-growing countries with job opportunities in older and more slowly growing or contracting ones, whether through immigration or outsourcing. Open global capital markets can similarly match savers with investment opportunities, boosting living standards for all. Unfortunately, the world now seems to be moving in the opposite direction.

Issue Brief: Why the Collapse in U.S. Population Growth Matters