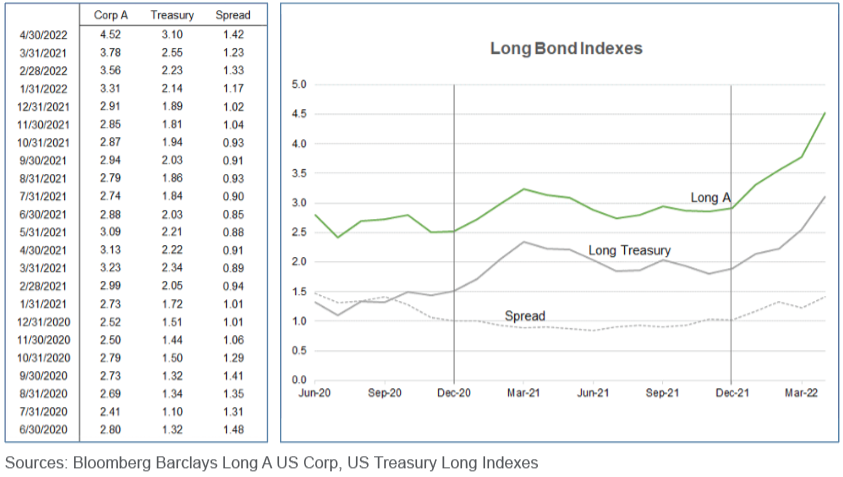 As has been widely reported, recent long bond yields are strongly affected by a shift in monetary policy aimed at dampening increases in inflation expectations. Corporate rates are also impacted by cyclical vagaries in the demand for capital funds. Both elements have acted to push rates upward, in the context of a strong economic recovery and high recent year monetary supply growth.

It remains to be seen how effective the new monetary policy restraint will be in suppressing the level of economic activity and thus constraining the inflation rate. Over the longer term, however, analysts generally do not expect a return to higher historic rate levels, given the maturation of the economy and the continuation of at least some elements of expansionary government monetary policy.

The following exhibits illustrate the results of an A-grade yield curve model developed as of April 30, 2022. 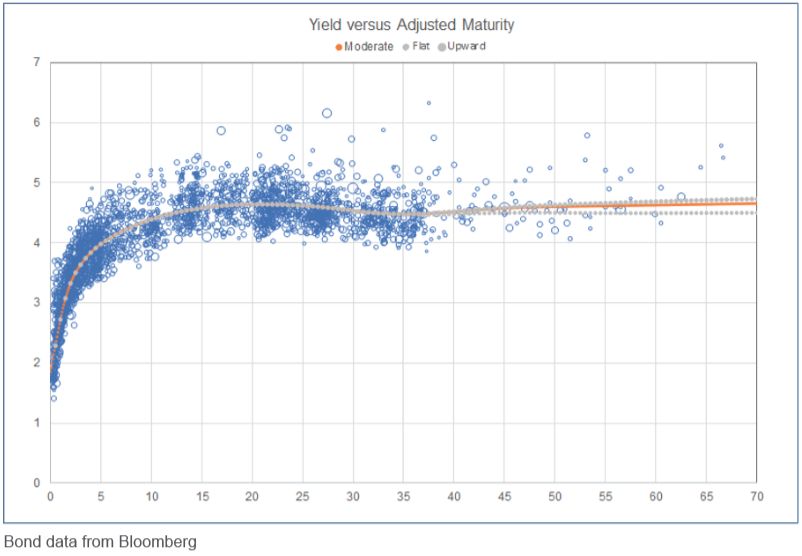 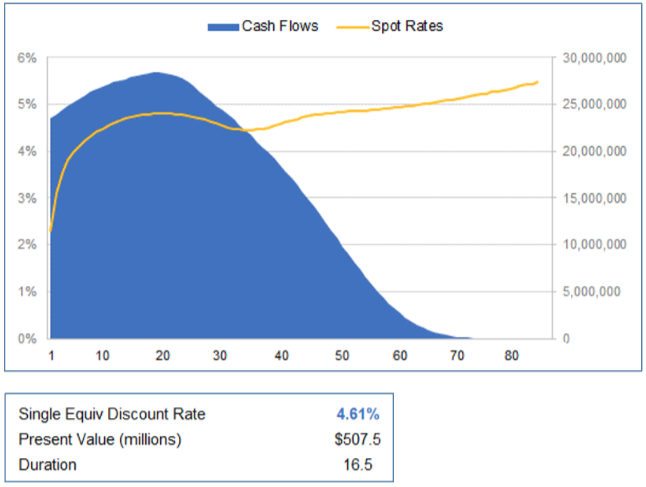 Discount rate outcomes almost always vary based on the duration of a given set of benefit cash flows—since the yield curve is almost never totally flat. Another element of variation in outcomes results from the approach taken to extrapolate the curve beyond the maturity point at which the most credible data ends—generally considered to be at about 30 years. The extrapolation impact will of course vary based on the duration of a given cash flow, i.e., for durations of 15 or less there may be little impact.

The Terry Group’s April portfolio includes roughly 100 bonds with maturities beyond 30 years, about 20 of which have maturities beyond 40 years. This information, though limited, enables a range of possible extrapolation approaches:

April discount rate outcomes moved up within a 70–75 basis point range. But both March and April discount rate results indicate a rather unusual pattern due to the flattened slope and “humped” nature of the recent curves (with yields peaking at about the 20-year point).

The summarized discount rate outcomes indicate that the variation in results based on duration is significantly dampened — there is a range of only about 20 basis points across our three sample cash flows for April, less than half of the typical dispersion.

The variation in results based on the choice of extrapolation approach is also significantly dampened given the flatter yield pattern, ranging from 0 to 6 basis points depending on duration. (Obviously, a cash flow stream with a significant long tail will be more affected by the approach used to extrapolate long bond yields.)

The following graph shows the range of model results over the period since The Terry Group’s yield curve model was initiated in June 2020. Over time, the variations in discount rate outcomes for our sample cash flows, encompassing both duration and model/slope variations, have generally resulted in a range of about 50–60 basis points, roughly centered around the index average yield. As the graph below illustrates, this pattern was significantly disrupted by the flatter slope and humped pattern of the recent months’ curves. 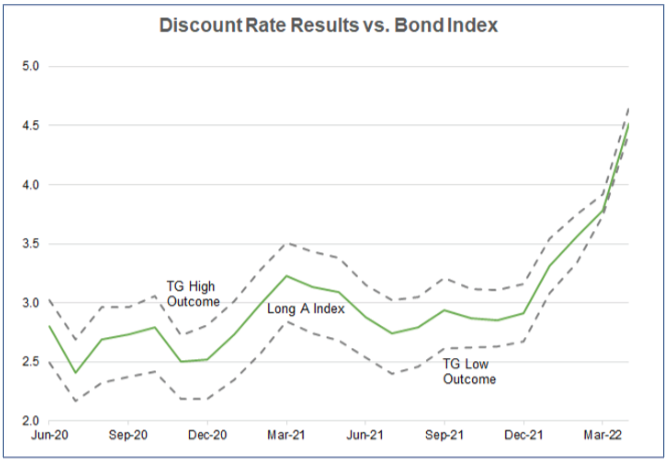 * This becomes an especially critical issue when market rates are far below typical historic levels, as they had been in recent months. Longer-maturity bonds in our portfolio have an average coupon of about 4.5%. To the extent this average coupon exceeds current market yields, the calculated duration for these bonds will be below that for a par bond at the same maturity. Representing the typical long bond at the maturity point where its actual duration is consistent with that of a par bond maintains the integrity of the yield curve (based on its par bond convention). Given the increases in April yields, coupon rates for the 10+ year portfolio bonds now align fairly well on average with market yields, which leads to a relatively small average gap between nominal and adjusted maturities.